The World’s Most Expensive Bottle of Wine

Whilst traipsing aimlessly along the retail corridors of Dubai International Airport recently, I spied a big beautiful black wine bottle in an elegant display case. It was impossible to miss because it was so enormous. Everyone who passed by was tempted to take a closer look and then step inside to peek at all the other wonders. A great lure further enhanced by the headline splashed across the shops glass frontage:

“The World’s Most Expensive Bottle of Wine*”

But whenever I see an asterisk after a comment I worry what the catch is. 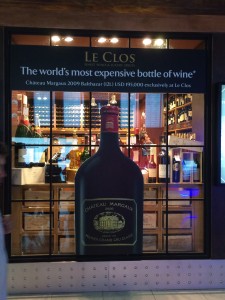 The wine shop in question is Le Clos. They claim their offer is the most expensive wine available for retail sale.

There have been a handful of bottles that have changed hands for more. They are generally individual bottles of incredibly rare wine, like a bottle claimed to have been owned by Thomas Jefferson or bottles sold for charitable purposes.

According to my research, the most expensive single bottle of wine ever sold was a 6 litre bottle of 1992 Screaming Jet, a Californian Cabernet that sold at a charity auction for $500,000 in 2000.

I must admit I wondered whether it really was a true Margaux because the label bore no resemblance to the simple classic Bordeaux style label normally attached to a bottle of this great first growth from Bordeaux. 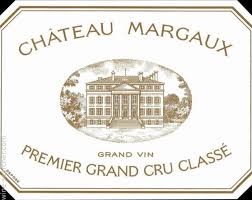 The jet black bottle was engraved with ostentatious gold lettering.

So at $US195,000 is it value for money? Well the Balthazer contains 12 litres or 16 standard 750ml bottles, so around $12,000 per standard bottle. So although Margaux, and the other top wines of Bordeaux are expensive this is not a great deal. In fact you can purchase a bottle of 2009 Chateau Margaux for around $2000 per bottle in Australia, including local taxes.

I enquired from the retail assistant at the Le Clos store about taxes on the shop’s. He wasn’t really sure but he thought I would probably be liable for taxes  – (import duty, WET tax and GST in Australia) – so maybe another $90,000!!!

And what about delivery?

Well the assistant wasn’t too helpful with that either. I guess an expensive item such as this in the cargo hold with general baggage would be risky and it would be too heavy for hand luggage. Perhaps you could buy it its own seat on the plane – but it’s greater than 100mls of liquid so you couldn’t bring it on the plane and so you lose there too.

So where does that leave us? Let’s say you win the lottery! So now money doesn’t matter and you decide to buy some fancy wine. Should you buy this wine? Well I’d save my money and buy a case of 2009 Chateau Margaux standard bottles.

Who would you drink it with?

You’d need 30 – 40 friends who you would be happy to give half a bottle each to. It’s not as though you can just stick the cork back in and drink the rest next week.

And what about the wine itself? Is it any good?

I have no doubt it would be outstanding: as close to the pinnacle of Bordeaux that you would probably be likely to experience. 2009 was a great year for Bordeaux and of all the ones from that vintage I’ve personally tasted those from the Margaux appellation have been my favourites. Always wonderfully perfumed and supremely elegant wines, they will last for decades.  Noted wine critic Robert Parker scored this wine at 99 out of 100.

Common sense would dictate against purchasing this single bottle and to my knowledge Le Clos has its three bottles still for sale. Chateau Margaux itself has retained the other three bottles that were created.

Le Clos has a couple of wine stores at Dubai airport and also another outlet a little out of the centre of Dubai. (www.leclos.net)  The Balthasar of 2009 Chateau Margaux is displayed at their premier store on the dedicated A380 concourse Terminal 3.