Why Did The Chef Drown My Octopus?

He was such a lovely cephalopod; fresh, tender, lightly dusted with a live 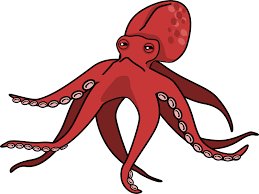 ly salt and pepper coating and satisfyingly crisp after a brisk deep fry. All he wanted was a squeeze of fresh lemon juice. So why did some barbarous chef decide he should be cruelly drowned, smothered in a sickly brown sludge that had more in common with sump oil than a luscious sauce?

It’s a question I frequently ask after dining out.  So many eating houses seem determined to create menus featuring a list of exotic new tastes or flavour combinations but what we end up with is another series of cookery experiments gone wrong.

I’m sure we could all point to extreme examples of monumental food disasters but even a simple night out illustrates my point.

Recently I visited a well-regarded Chinese restaurant with my family. It was beautifully decorated and the staff were great. However, the food lacked a confident grounding. The ingredients were of high quality but the incessant fiddling and constant tricking up of flavours was a failure. Nothing was as terrible as my miserable octopus but the experience was frustrating. What could have been a great night out fell flat.

Why did the duck pancakes end up in rice paper wrappers instead of soft flour based pancakes where the texture compliments the main ingredients and deftly holds the parts together? Not because it was better, just because it was different. And the seeded mustard sauce on the beef stir fry clashed violently with the other classic components of the sauce. Maybe in the hands of a master the right flavour balance could have emerged but I was forced to bow my head and hope the next dish would spark my spirit.

I put such doomed culinary expeditions down to the plethora of television cooking shows. We see amateurs, and to be fair professionals as well, trying to outdo each other in a series of labours where invention tests seem to be more important than skilful renditions of satisfying dishes. Maybe chefs think they have to create new stuff to stay ahead of the pack and maybe there are too many customers searching for the new or novel and not appreciating the simple and satisfying.

We should learn from a careful appraisal of Andy Warhol’s great line: “I like boring things.” Warhol was pointing out that there was much to be gleaned from a careful appreciation of the seemingly common. His ultimate depiction of this was of course the Campbell’s soup can. The irony is that by highlighting the mundane through skilful replication and almost endless repetition he created something new and made the everyday more interesting and worthy of our attention.

Similarly, there is a lot to be admired in the outwardly boring dishes that have survived culinary history. These great dishes depend upon the sourcing of great produce, of sympathetic handling, and practiced technique. And it is here that the deficiencies of many restaurants and chefs are exposed. Some are simply happy to accept second grade produce. But perhaps worse is that others, even if they have great ingredients, mishandle them or lack the necessary skills to produce quality dishes for customers. Something as simple as a lovingly made omelette is a rare experience.

Now I’m not against new ideas and interpretations. I’m always thrilled when by chance or on recommendation I find a wonderful place where imagination and technique shine. I love to be wowed and I’m ready to applaud the truly creative. But sadly such experiences are frustratingly rare. What I know is that my friends, family and occasional dining partners are never bored with simple food lovingly prepared, or great renditions of classic dishes.

There is a lot to be admired in restaurants that have the determination and commitment to reproduce that wonderful dish time and time again, night after night in their busy kitchens. So thank the staff at your local eatery when they do the simple things really well and consign pretentiousness and new for the sake of the new to the garbage.