The difference between Gelato and Ice Cream

When I was a kid we had ice cream. Unless it was really hot in the middle of summer, then we had ice 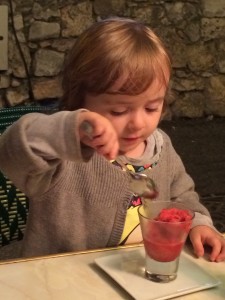 blocks – frozen water with flavourings, usually fruity. Very occasionally we would have what we were told was a great treat, gelato, which seemed about half way between an ice cream and an ice block. It was almost as creamy as ice cream but had a bit of iciness in its structure. But there were always so many great flavours.

It was only years later after eating properly made creamy gelato that I realised that the iciness was in fact a flaw in the gelato. It was due to either a lack of balance in the water / sugar / fat ratio of the ingredients or else improper churning.

Those of you who have been following my recent posts will have seen I’ve taken a bit of interest in ice cream – I’ll put in down to Sydney’s current hot weather. But what is the difference between gelato and ice cream?

There are three main differences and if you understand what they are you’ll appreciate why ice cream and gelato taste different.

Firstly, ice cream has a higher fat content than gelato. Ice cream has at least 10% fat, and premium products may have 16%. Gelato by comparison is generally 3 – 7%. The higher fat content comes from using a much higher percentage of cream to milk in the production process and also the fact that ice cream has more egg yolk. Gelato uses fewer egg yolks and sometimes none, depending on the manufacturer and particular flavour.

Secondly, ice cream has a higher proportion of air incorporated into the mix, up to 50%, whereas gelato is closer to 25%. This comes about by the churning process which is much faster in the case of ice cream. Gelato’s slower churning delivers a product that has less air in it and so it is denser and less fluffy.

Finally, ice cream is stored at a much lower temperature, around -15°C compared to gelato at -5°C. This means ice cream is harder and melts slower.

These differences change how these frozen delights feel in your mouth.

Gelato’s lower fat content doesn’t coat your mouth and taste buds as much as ice cream does. This allows the main flavour in your gelato to be more apparent and intense. You need less gelato to get a flavour ‘hit’. Gelato is also softer and more elastic and feels smoother or creamier.

The increased air content in ice cream means it is less dense, and in fact cheaper ice cream has the highest proportion of air. You can see why ice cream is sold by volume and not weight in supermarkets!

And because ice cream is less dense it melts faster. This is one of the reasons it needs to be stored at a lower temperature. The lower temperature means that it holds it shape better, but it is harder. Gelato’s higher density means it melts slower, but remember, it starts from a higher temperature so you’ll probably feel its running down the side of your cone sooner. But that higher temperature does have other advantages. Because it’s not as cold you can taste the flavours better. And you don’t need as much sugar in the mix. The colder you make something the greater the amount of sugar you need to make the sweetness apparent to your taste buds.

I must admit the best gelato my favourite frozen delight: is to the creamiest and most flavoursome product and being slightly warmer easier to gulp down before it melts.

The differences between ice cream and gelato also impacts on the nutritional value of the products and this will no doubt be of interest to many people:

A 100 gram serving of gelato has approximately 90 calories, 3 grams of fat and 10 grams of sugar

A 100 gram serving of ice cream approximately 125 calories, 7 grams of fat and 14 grams of sugar

But you will no doubt remember that gelato is denser than ice cream, so the same size scoop means your gelato weighs more and so you may in fact end up with more calories. And sauce, sprinkles etc. on top can change this whole equation.

If it all seems too complicated just enjoy a cup or a cone, whichever type or flavour you prefer.  But remember, in moderation, like a lot of other stuff.