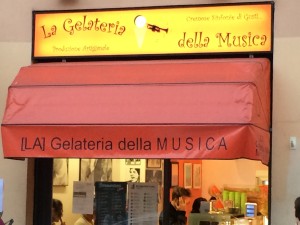 In October last year I stayed at a rather non descript hotel in the Porta Genova district of Milan in Italy. One day whilst talking to the hotel manager our conversation drifted towards the unseasonally hot weather. He told me I should try the ice cream at what he claimed to be the “Best Ice Cream Shop in the World”.

It turned out to be a shop nearby that I’d spotted the night before. Because of the funny sounding name, La Gelateria della Musica, and the big crowd queued up outside, I had mistaken the establishment for some kind of music venue. He told me there was always a queue outside the gelateria but I could place an order online and avoid the wait. He suggested the pistachio – there were two different types of pistachio he informed me – but it was all good. I decided I had to test their creations, especially as I was aware of a shop in Sydney Australia, the “Cow and the Moon” in the suburb of Enmore, that had recently been awarded the title of the shop with the World’s Best Gelato only a month before. 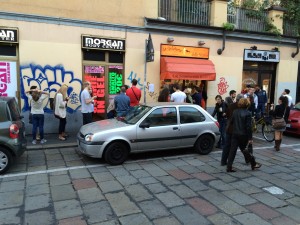 I must admit standing in the line outside the shop and watching the quiet reverence that the patrons exhibited, I was more than a little apprehensive. I felt I was in that episode of Seinfeld, the Soup Nazi, where you don’t question or complain but simply subjugate yourself to the well constructed protocol slavishly followed by the locals. There was a guy on the door who regulated who went in and who came out. There seemed a high degree of subjectivity as to whom got through first. Maybe they had booked online? Maybe I wasn’t quite young or beautiful enough, but I’m sure they knew I wasn’t quite local enough.

I finally made it inside. First stop, the cash register to place my order and pay. The staff were very understanding and polite but I obviously should have studied the list of 30 or so flavours listed on a small sheet of paper on an outside wall. After bumbling around for a minute I settled on one scoop of pistachio, toasted not classical as George had suggested, and a scoop of Lady Gaga (I had been seduced by her allure yet again). Then onto the serving queue where half a dozen young beauties were scooping multi-coloured balls of sparkling delights into cones and cups. I handed over my ticket, got my prize and headed outside.

Sublimely smooth and surprisingly creamy is how I would describe my afternoon snack. Not at all cold. Gelato is the Italian word for ice cream but has less air, and less fat and sugar and not served not as cold as our traditional ice cream. Most gelato you get is icy and not nearly as smooth as the real stuff. I’ve written a short post explaining the differences in a bit more detail here. Gelato vs Ice Cream.

There is no doubt La Gelateria della Musica deserves the awards it receives. This place has fantastic ice cream but it’s also great fun to mix with the locals and get a feel for their neighbourhood. It isn’t one of those tourist traps that sucker you in and leave you thinking you’ve been dudded again. You can see why the queue is full of locals that enjoy a great creamy delight like the rest of us.

My flavour advice – go with the pistachio and leave Gaga’s vanilla with strawberry goo and cake pieces to the pop barrel. And it’s definitely worth the wait. Cost 2.30 euros for 2 scoops – about $3 – fantastic value!

But is it the World’s Best Ice Cream? Well it certainly deserves a nomination, but the best? I’m not sure. To test that claim will require a trip to 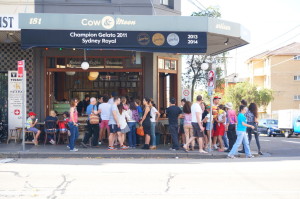 Enmore in my home town of Sydney and fortunately not far from where I live. Recently, Cow & The Moon Artisan Gelato took out the Gelato World Tour title in Rimini, Italy. And then I can compare both these fine establishments to my local favourite ice creamery, Gelato Messina in Victoria St, Darlinghurst.

So in the interest of thorough research and to help beat the Sydney heat, that’s my next stop and material for my post this coming weekend.